“Where is the San Diego Safari Park?” you might ask.  It’s in the exact same location as the SD Wild Animal Park, in fact it is the SD Wild Animal Park BUT with a new name!  You may also be wondering “Why the name change?”  This shift in re-branding the park’s name and image came about due to the opinions of those in charge who considered the name “Wild Animal” as NOT encompassing all the values of what the animal park stood for.  Park officials thought changing the name to “Safari Park” would better suit the public’s perception of what the place was about and would better describe visitors’ experiences there. 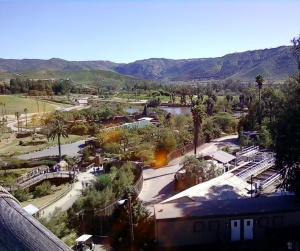 park view from the deck

The SD Safari Park is a vast area of land in the north county of SD.  It was created to feature animals in a more natural habitat rather than in caged, enclosed spaces like the zoo.  It also serves as a transitional space for many animals to adapt to certain environments before being released into the wild. 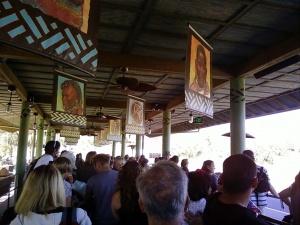 I think the walking trails at the SD Safari Park are much more enjoyable than those at the zoo because of the different construction and openness of the park.  The trail near the entrance even has tropical parrots that are freely perched atop some branches.  My friend and I also rode the safari tram which gave a thorough tour of the park, making you feel like you were on an African safari.  For those that aren’t SD Zoo / Safari Park annual members, this tram does cost a small fee.  Usually two trams are operating and can hold plenty of passengers.  Waiting times vary depending on how busy the park is; I remember waiting about 25 – 30 minutes or so.  Besides the tram, there are other activities such as the Sponge Bob 3-D movie and the balloon basket ride, both cost a fee but are a good once in a lifetime experience.

If you like taking pictures as much as I do, the SD Safari Park features various spots for taking pictures such as a life-size rhinoceros, a huge hanging bird’s nest, and large lily pads in a small pool of water.  Some decks showcase the amazing view of the entire park and beyond.  There are also lots of eateries to satisfy the hungry adventurer and beverage stations to quench your thirst.  I suggest bringing comfortable walking shoes because some of the trails are elevated and some are dirt paths.

So if you’re ever in the mood to venture off and sightsee animals in a natural setting, stop by the San Diego Safari Park.