Merry Christmas everyone! I hope you’re all having fun with family and friends on this festive day. Christmas is a time of the year that always seems to bring me cheer… that and my birthday in the summer of course. But today is particularly special because it celebrates the birthday of that special man who changed the lives of many for thousands of years, and whose life has truly become a story for the ages. With that said, I would like to focus on my experience at the annual Disney Candlelight Processional, a celebration of the biblical story of Jesus’s birth accompanied with choral performances.

I blogged last year about the Candlelight Processional but this time was even better because Disneyland hosted a contest among annual passholders for a chance to win reserved seats to the event! Normally seats were reserved for people who purchased dinner packages for the event or who were VIPs and received invitations. Last year, I remember waiting an hour before the performance, and then having to stand throughout the entire show in order to see; even then it was hard since I only stand at a whopping height of 5’6”. The new contest was issued in the months of October/November with e-mails sent to the winners shortly after that time. Winners were allowed to have up to 3 additional guests at the event who also must have been annual passholders at least until the end of the contest period. 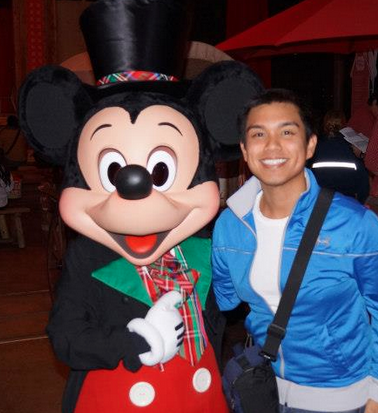 We attended this event earlier in December. Claiming our wristbands was a fairly easy process and the park had plenty of staff on hand to help. We then waited in line (approximately 40 minutes to an hour prior to the event) to be seated, keeping in mind of the first-come-first-serve policy. It was worth the wait because we scored great seats in the front-mid section right next to the exclusive VIP seats. I was ecstatic to be so close to the performance and brought my good camera to capture the moment.

The Candlelight Processional started with the symphony on stage and hundreds of choral singers marching down Disney’s Main Street towards them, while singing Christmas music. The narrator of the night was Edward James Olmos, famous for his roles in “Stand and Deliver”, “Maiami Vice”, “Selena”, and recently “Battlestar Galactica”. This Hollywood veteran is also a Candlelight Processional veteran, narrating the Christmas Story for over 15 years, and it definitely showed in his voice and interpretation of the text. Traditional Christmas songs were sung after each section of the story, with some songs featuring soloists. The music is always the same each year but is amazing to hear it live.  I’ll definitely be coming back next year; it’s my new Christmastime tradition! 🙂

3 thoughts on “A Disney Christmas Story”